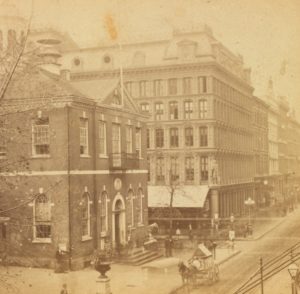 The GSP indexes include names and dates of death, which can be used to find original death notices in the Public Ledger newspaper, available in some libraries and on Newspapers.com and GenealogyBank.com.  The indexes are valuable as they include many names that online OCR searches may not recognize, and enable researchers to locate obituaries that they might not find otherwise.

This index is a compilation of the marriages and deaths and other items of genealogical interest, appearing in the Philadelphia Public Ledger from 1844 thru 1851. If the name does not appear in the marriage or death column, researchers should search all columns of the newspaper issue, including columns of ads. Not all marriages and deaths were published in the paper during the period covered.

Every effort has been made to make this index as complete and accurate as possible. Some errors or omissions may have inadvertently occurred.

The following information may be helpful:

1. Complete microfilms of the Philadelphia Public Ledger are located at The Historical Society of Pennsylvania, 1300 Locust Steet, Philadelphia, PA. and at the Free Library of Philadelphia (Main Branch), Benjamin Franklin Parkway, Philadelphia, PA. The Public Ledger is also available through Newspapers.com and Genealogybank.com, which are paid subscription sites. The GSP index, as it was compiled by human volunteers, often uncovers names that might not be uncovered by searches in online newspaper databases, which rely on optical character recognition.

2.  When a name of interest is located in this index, check the microfilm or online version of the newspaper under the date given for the complete notice or news item. Check the newspaper for several days after the date shown in the index for possible additional information.

3. When the number (2) appears after a name it indicates that more than one item regarding the name listed is in that issue of the paper.

The volunteers have donated many hours of their time to make this valuable genealogical information available.