Founded in 1681, Philadelphia was one of the original three counties established by William Penn, along with Bucks and Chester.

The city of Philadelphia originally encompassed an area from the Delaware River on the east to the Schuylkill River on the west; on the north bounded by Vine Street, with a southern boundary of Cedar (aka South) Street.

In 1854 the city incorporated to include all of the townships and boroughs surrounding the original city plan, and took on the familiar shape of the 135 square miles we see on maps today.

Philadelphia researchers should know that original images of the Philadelphia Death Records are available online from 1803 through 30 June 1915 at FamilySearch.

Any researcher planning a visit to Philadelphia should allow time for a visit to the Register of Wills in Philadelphia City Hall, Northwest Quadrant, rooms 180-187. The will and administration index books are housed in room 187.

Philadelphia wills from 1682 through 1980 are available on microform and can be viewed on reader/printers in this office. (although the Register of Wills maintains records to the present, the more recently recorded documents are computerized.) Copies of probate records cost $2.00 per page.  Please note, no Administration files are available on microform; these original documents were never filmed and are stored in the Philadelphia Register of Wills Archive.

If researchers have specific questions about procedure to obtain probate records, they can contact the Philadelphia Register of Wills office at 215-686-6261 or 215-686-6269.

15. Workshop of the World [Survey of 150 industrial sites in seventeen Philadelphia neighborhoods.]

9. The Lutheran Archives Center at Philadelphia

3. Center for Northeast Philadelphia History [Sponsored by the Historical Society of Frankford]

6. The Historical Society of Frankford

9. Friends of the 1799 Lazaretto Researchers 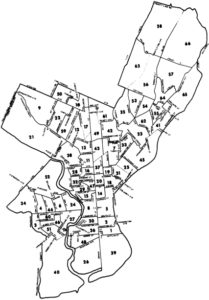