If you have any trouble logging in and resetting your password, accessing member collections, or have any other questions,  e-mail us with details at membership@genpa.org. 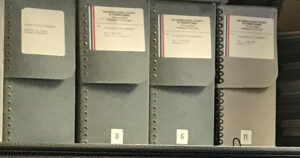 GSP Member collections include newspaper indexes, church records, cemetery records, funeral home records, and other records.  Text-based PDFs of records are searchable, while handwritten records are image-based and can be browsed page by page.

Please read through the GSP Website Tips for search tips and more information about our collections.

Includes a vast collection of abstracted Pennsylvania source material, compiled genealogies, research methodology, and bibliography to Pennsylvania researchers for more than 115 years. Searching PGM through our full-text search could reveal your ancestors in church, tax, military, orphans’ court, apprentice, administration, immigration or naturalization records, deeds, cemetery inscriptions, newspaper extracts, compiled genealogies, and more.  Early and most recent issues of PGM are online, other volumes will be back online soon.

The first Penn in Hand (PIH) newsletter was published in February 1980 and included news of genealogical societies across Pennsylvania, information on upcoming genealogical events, research tips, and a list of new members. While many changes have taken place in the world of genealogy since 1980, the core information in Penn in Hand has remained valuable to researchers.  Check out  old issues of PIH for research tips from seasoned genealogists, reviews of books that could be helpful in your work, and family history stories that can inform your understanding of your own family.  In progress, with remaining issues back online soon.

The Mount Moriah Cemetery Database was compiled through much work by dedicated volunteers of The Genealogical Society of Pennsylvania.  To request a Mount Moriah look-up, free for members, email info@genpa.org.

An extensive collection of church and cemetery records and other transcriptions and family history information from several Pennsylvania counties compiled by Mrs. Walter A Berryman (Doris Fritz Berryman) and donated to the Genealogical Society of Pennsylvania by the Mahanoy Area Historical Society. Some records are only one or two pages and other include hundreds of pages.

The records are full-text searchable.  The online collection includes all 16 publications.  The publications will be available for sale in a digital format on Flash Drives.  The corresponding Churches and Ministers can be found in the respective Title and Profile document.

The books are also available for research at the GSP library.

The Dutton collection is a transcript, alphabetically arranged, of about 4000 records of deaths, marriages, and other events relating to numerous individuals and families, most from the counties of Chester and Delaware. This collection documents family events and migrations, including several to Ohio, Indiana, Missouri, and South Carolina.

The document is a copy of a transcript that was owned by Gilbert Cope, of West Chester, who described it as follows: “The following records of deaths, marriages, etc., are taken from a book belonging to Hannah Dutton of Sugartown (Willistown township), and as I have understood it formerly belonged to her father Richard Dutton of Middletown (born 1776). There is some reason for supposing that it had belonged to one of the Larkin family, perhaps Richard Dutton’s father-in-law Isaac Larkin, but I have not inquired particularly as to its history (the spelling is not always correct). (Copied 1872) (Signed) GILBERT COPE West Chester Penna.”

Der Bauernfreund (“the farmer’s friend”) was a German-language weekly newspaper founded in Sumneytown, Montgomery County, Pennsylvania, in 1828 by Adam Slemmer and Enos Benner. Soon after founding the paper, Slemmer withdrew but Enos Benner continued publishing it until 1858, when he sold it to Albrecht Kneule. Kneule combined it with The Pennsbury Demokrat and continued to publish it well into the 1890s. Below are translations done by Kenneth H. Hallman of the marriages published in issues from August 1832 to December 31, 1845, courtesy of the Montgomery County (Pa.) Historical Society

An extensive collection of church and cemetery records and other transcriptions and family history information from several counties compiled by Mrs. Walter A Berryman (Doris Fritz Berryman) and donated to the Genealogical Society of Pennsylvania by the Mahanoy Area Historical Society. Some records are only one or two pages and other include hundreds of pages.

Mahlon Van Buskirk was commissioned May 6, 1811 as Justice of the Peace for Moreland and Upper Dublin Township.  Records from 1812-1839

Selected and indexed by volunteers of the Genealogical Society of Pennsylvania

Earliest Records of the Burials in Philadelphia from the Board of Health, 1803

Earliest Burial Records of the Board of Health, 1807

A 22 page document (Transcribed January 23, 1971 by Dale A. Dickey, great-great-grandson of Thomas Dickey, a member of the Society

This includes records from several Philadelphia institutions.  They can be cross-referenced against census records and newspapers to find additional information.

These were compiled with much work by indexing volunteers from the Genealogical Society of Pennsylvania who examined newspapers and extracted references to individual names and dates.  Indexes such as these have proven to uncover many references to people that are not picked up by OCR scanning of newspapers.

Emigrants from Hesse, Germany Who Left One After Another for Pennsylvania, 1748-1766

A 1688 Census of Kent County, Delaware

Extracts from the Register of the Ancient Chapel of St. John the Baptist, near Milton, Delaware

For Email Newsletters you can trust.

Copyright secured by Digiprove © 2016-2020 The Genealogical Society of Pennsylvania